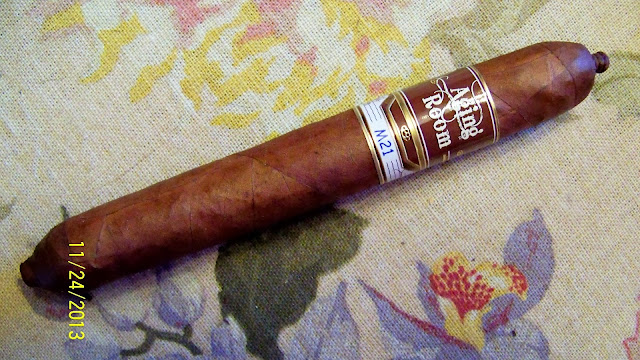 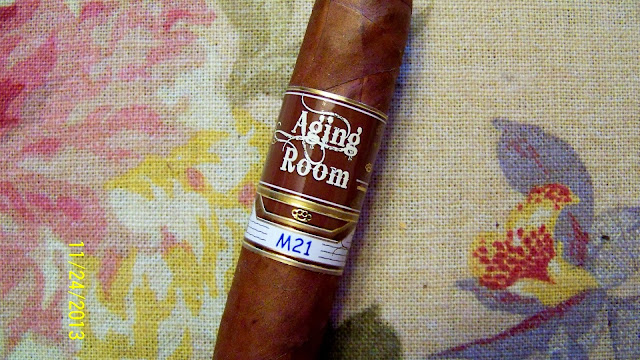 Video review HERE.
The M21 is the newest edition from Aging Room Cigars and Rafael Nodal. The M21 Fortissimo comes in one size; 5 3/4 x 47 preferido. The term fortissimo in music means strong and that's what Rafael was aiming for with this cigar. A full bodied Dominican puro. These cigars were introduced at this year's IPCPR. There were only 3000 numbered boxes of 10 produced. My sample came in a coffin box of one cigar. 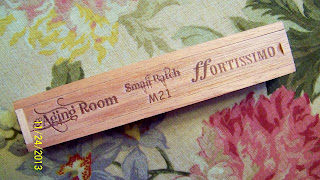 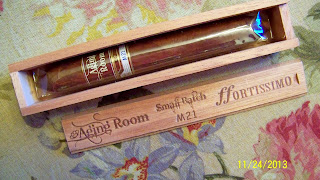 
Rafael Nodal said this in an interview with Cigar Advisor:

This cigar is something I have been working on for a long, long time…Part of the Aging Room family, M21 is the blend, is the date that we come out with the blend. Its a Monday the 21st day of last year. Probably the strongest cigar ever to have come out of a Dominican Factory…
When you smoke this cigar, you are going to get a lot of body, but also a lot of aroma, because the tobacco has been aged for so long that we were really able to capture what were looking for, a real flavor of the Habano Dominican grown tobacco…ƒƒortissimo is a musical term that means “strong”, and thats what you get when you try the M21 Fortissimo.


These cigars are a Dominican puro with a seven-year-old Dominican habano wrapper grown in La Canela over fillers from the Dominican Republic.


This shape cigar is beautiful and the construction is first rate. I began by cutting the pigtail from the cap. The test draw was good especially when you consider the tapered foot. The initial flavors were an intense black pepper that I rated at a 9+. The other flavors were sweet cedar, earth, cream, and leather. The initial pepper was so very intense and nice especially when retro haled. The other flavors are so balanced it was actually difficult to pin then down. The cigar already has a full bodied feel to it. 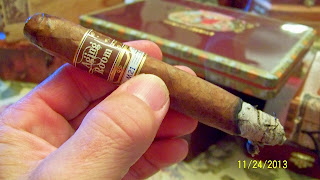 About one inch in the cigar is burning evenly. The cigar has calmed down somewhat. The intense pepper that I had initially has now downgraded to an 8. The other flavors have also settled. There is still a sweet cedar. There is now a graham cracker flavor. The leather notes are still there along with the earth. I would call the cigar full bodied now. The finish is a very sweet cream somewhat like a whipping cream. There is also some lingering pepper. The sweet flavors of cedar and graham cracker are fantastic. There are also some cream notes to give it some additional sweetness. 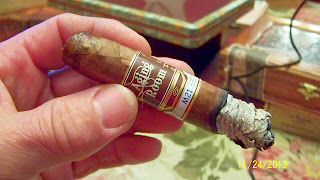 At about the band the notes of cedar and graham cracker have some richness to them. The pepper is still very good. The earth notes have decreased and the leather notes are holding the bottom. The finish is unchanged. The cigar is burning fairly evenly. I'm about 40 minutes in at this point. 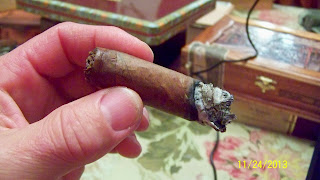 With a couple inches remaining I noticed the cigar has gotten a little soft and spongy. There are a few charred oak notes on the front end. The cedar and graham cracker notes are toned down. The pepper has now changed to white pepper. It's not as intense as black pepper now. The leather notes are relaxed at this point. They are still there but they are milder. The finish is now a sweet cream instead of a whipped cream. It still has some lingering pepper. The cigar continues to be full bodied.


At the end the charred oak notes came and went. There are notes of sweet cedar now and the graham cracker notes have decreased. There are flashes of cinnamon. The pepper remained very good. The leather notes are subdued. I really liked the flavors in this cigar. With the exception of the sponginess in the final third this has been a world class cigar. Fantastic flavors. This is the fullest of the Aging Room Cigars I've had. I stress that you need to get these while they are available. I truly loved it. 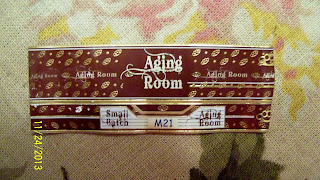