Today was not the best of days. First we attended a memorial service for a former employee of Southland Equipment who died last weekend. Then we visited Mr. Bob in Baptist Hospital. He had fallen several times over the past week and Wednesday he was admitted to the hospital. I didn't know he was hospitalized until yesterday. He appears to be in good spirits but his right side is currently paralyzed. Keep him in your prayers. As you will remember, Mr. Bob is an 84 year old man who meets us every week at Hemingways Saloon and also went on our Southern Caribbean Cruise in 2009. That was the first cruise he had ever taken. He has also attended the S.C. Sit Down for several years. Though he's not a cigar smoker he loves to be in the company of them. 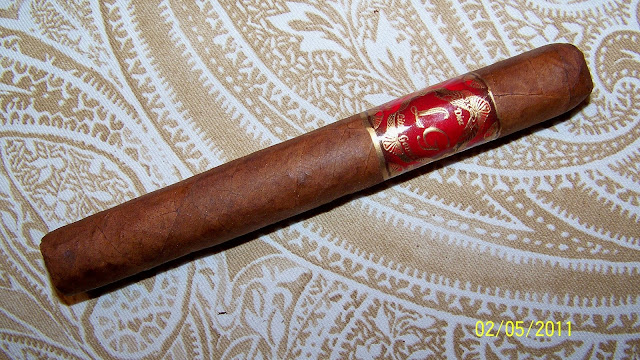 Litto Gomez cigars are named for their creator, and were introduced in 2004 to salute 10 successful years of the La Flor Dominicana brand. Starting in April, 2008 each Litto Gomez Diez box is vintage dated and blended, which results in each years’ release being different than the last. This particular cigar is dated 2009.

The cigar started with intense, sweet cinnamon spice with tons of black pepper. There are underlying notes of sweet, rich vanilla with subtle notes of raw almonds. The draw was a bit firm. The finish was very long with sweet notes of vanilla and raw almonds with some lingering black pepper. After 3/4 inch there were sweet orange citrus notes. The combination of the cinnamon, vanilla, and orange citrus makes the cigar quite tasty. All the while there are subtle notes of raw almonds and lots of black pepper. The cigar is full bodied. By far, the La Flor Dominicana brand is the most powerful of Dominican cigars. The final 1/3 continued with it's rich flavor. I found this to be a great cigar. The sweet cinnamon, rich vanilla, and orange citrus along with the powerful black pepper last throughout the entire smoke. Lovers of full bodied cigars will really enjoy this cigar. I have to be honest, I smoke a lot of cigars and this cigar hit me like a ton of bricks. If you're new to cigars or normally smoke mild to medium cigars be forewarned. It is quite full bodied.