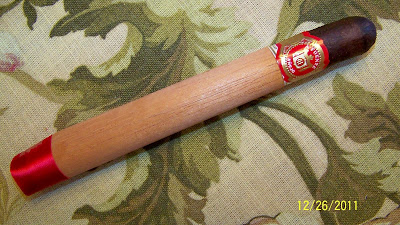 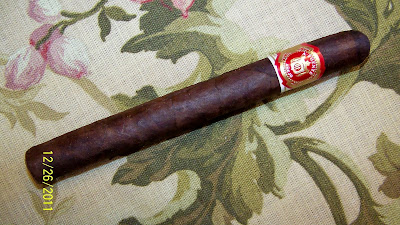 A dark, well made cigar. Arturo Fuente Anejo is one of the world’s rarest cigars. It features a dark maduro wrapper that is aged in cognac barrels. Each cigar is aged for 5 years and then cured an additional 6-8 months in cognac barrels to bring out the full potential of the tobacco used. The anejo features a blend of select tobaccos from the Opus X, Hemingway, and Don Carlos line, giving it a rich and vibrant flavor. Usually only available during Christmas time and Fathers Day.
I actually reviewed this cigar way back on January 9th or this year but let's take another shot at it. This cigar was provided by Cigars Direct.
Video review HERE.
The band clearly says Anejo on the bottom. 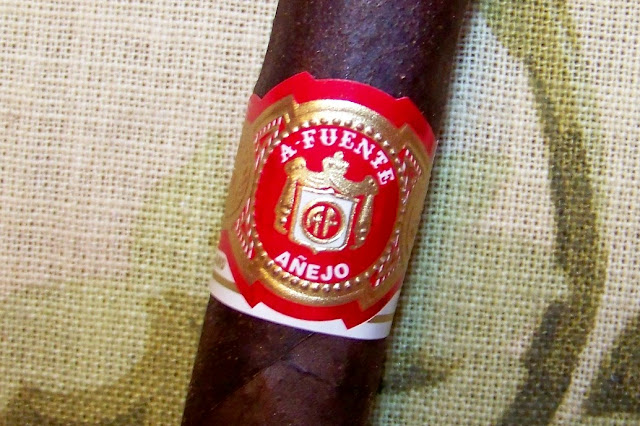 The test draw was very good. It is quite dense. 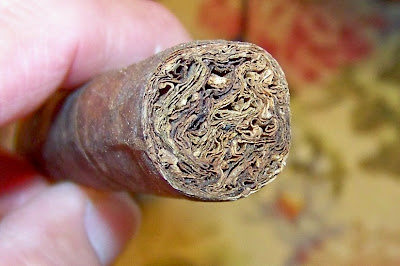 The cigar started off with coffee, molasses, and vanilla notes with a ton of black pepper. The cigar feels full bodied even at the outset.
About 1/2 inch in the cigar settled down into the same notes as above with the addition of leather notes. All the flavors in this cigar at this point are "dark". This cigar would probably pair well with coffee or bourbon (straight bourbon; no water or coke) The cigar is expected to take several turns. The finish is one of thick, sweet vanilla with some faint almond notes. The pepper lingers along the palate and on the tongue. The cigar is burning very evenly.
After only another 1/2 inch the cigar made a change to one of rich, sweet orange citrus. The coffee and leather notes are still there along with the black pepper. The cigar is quite rich at this point. You can taste the richness immediately on the draw! There are slight hints of almonds also; lightly roasted almonds.
About another 1/2 inch or so I decided to reevaluate my description of the rich notes. They now seem to be one of a rich tawny port. Yes, you could describe them as orange citrus but I'll stick with the tawny port description. The leather notes are more noticeable. All the flavors work well together.
With about 2 1/2 inches remaining the cigar has not changed much from my last description. The finish has more of a raw almond flavor along with the vanilla. The pepper has remained quite good. The last description of the main flavor as one of tawny port is still accurate. They are somewhat subdued at this point however. There was an addition of cedar notes. Other than that the cigar remains about the same. 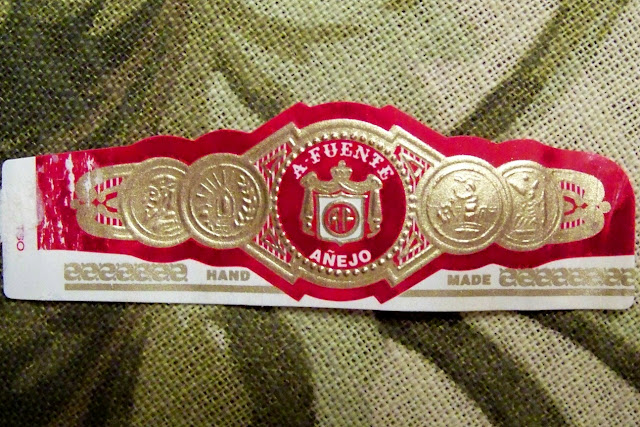 At the end of the cigar it wrapped up very similar to my original review back in January. This is a very good, sweet cigar with lots of coffee notes and tawny port flavors. There are also leather and cedar notes. The pepper is very good. The finish is one of primarily vanilla but at times there is the addition of raw almond notes. This is a great cigar that you should try. They tend to not stay around long at local shops so act fast!
Score: 94
Posted by Tim Rollins at 12/26/2011