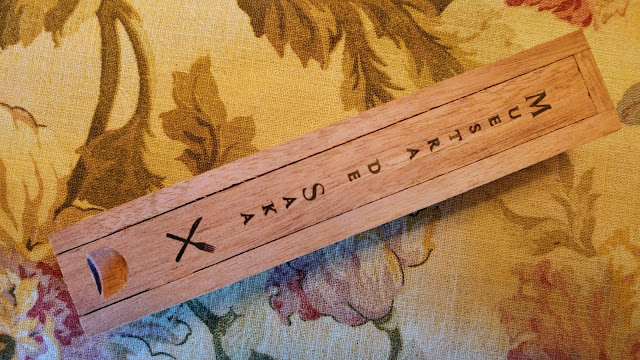 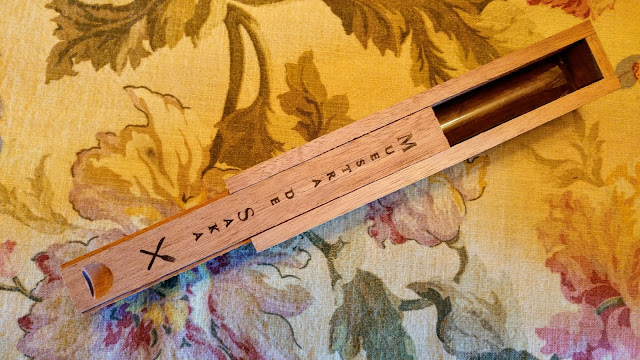 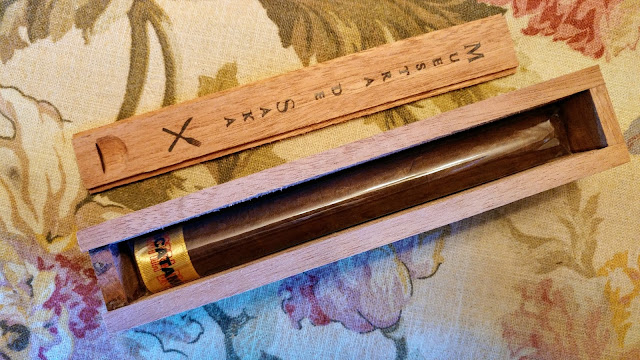 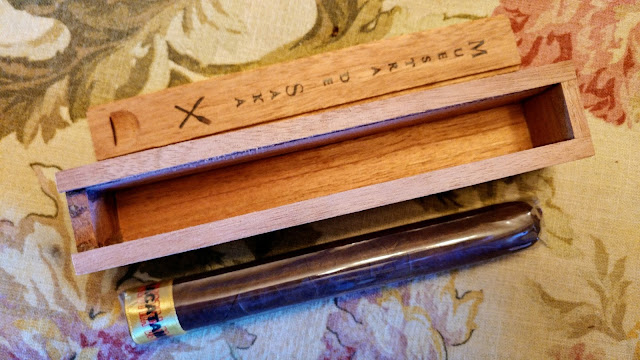 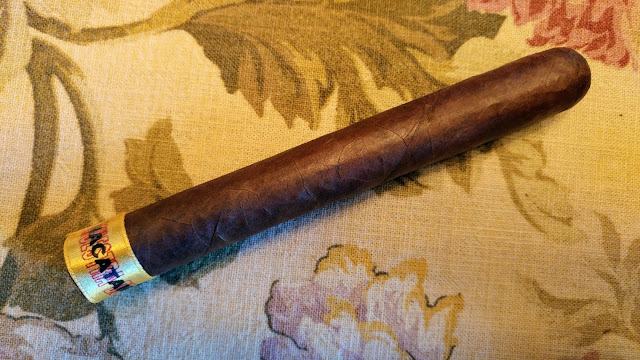 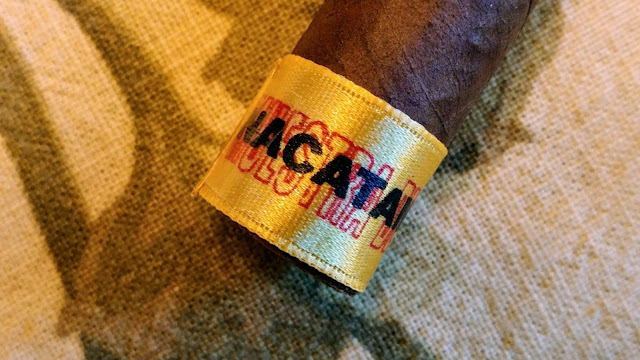 (Description taken from Cigar-Coop.com website)
Just before the 2017 IPCPR Trade Show, Dunbarton Tobacco & Trust had started taking pre-orders on the second installment of the Muestra de Saka series, the Nacatamale. Muestra de Saka follows a “one size, one blend” model where each installment of the series has a unique blend mapped to a particular vitola. The Nacatamale features an Ecuadorian Habano wrapper over Nicaraguan tobaccos from a single farm.  It is available in one size, measuring 6 x 48. Like the first installment, the Muestra de Saka Exclusivo, the Nacatamale will be packaged in an individual coffin with seven coffins packaged per box. Production for 2017 is 2,250 boxes.

Saka explained some more background on the project on this social media post:

What made this cigar a unique blending challenge was I went “viejo granja” style with it. For over a century most cigars’ entire filler recipes were comprised of just ONE farm’s tobacco and any complexity was introduced by extremely careful leaf processing, selection and positioning within the bunch. Whereas these days as we have hundreds of ingredients to work and blend with to create interesting and satisfying ligas.

So, the challenge was to see if I could make an “old farm” style liga that could hold its own with the modern blends we create today. I am genuinely curious to see what the feedback on this cigar will be and I have probably poisoned the pool a bit by stating it is a single ingredient liga, but at the same time I am really proud of this blend – amazing the amount of effort it took to pull this one off and of all the Muestra’s I don’t believe any other will be as challenging skill wise.

This cigar is considerably more robust than the Exclusivo and since this puro’s tripa are all from just one small, independent farm in Jalapa, Nicaragua, I will not be disclosing the name of the vega.

Note: The Nacatamale Coffins feature a crossed knife and fork to make them identifiably different than Exclusivo when viewed in the coffin on the shelf.

Saka says he has sold 99.5% of his inventory and will be keeping the remainder for himself.

The cigar is flawlessly made. Almost no visible veins. The wrapper is dark brown and oily. The density shot shows a very dark assortment of tobaccos. 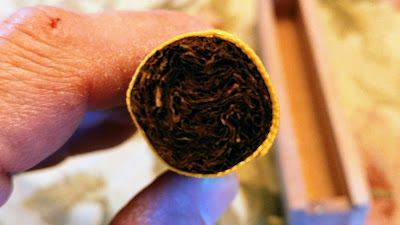 The cap is finished with a small pigtail. 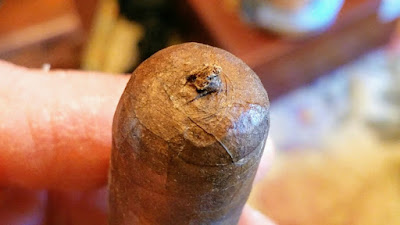 The test draw after cutting the cap was very good. The initial flavors were a candy-like orange citrus, cream, cinnamon, brown sugar, heavy leather, and a black coffee base. There was a massive amount of black pepper rated at an 8 1/2. The leather, although heavy, is smooth and makes an excellent bridge connecting all the sweet flavors. The leather is in no way oppressive. It tastes like it belongs there. The cigar is very sweet and the leather compliments those sweet flavors perfectly. The cigar tastes full bodied. The finish is a leathery cream with slight citrus aspects and heavy lingering black pepper. The cigar had an excellent start. 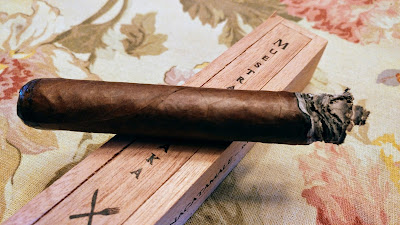 2 inches in (28 minutes) the citrus notes are morphing over to a sweet cedar. You also have a lot of brown sugar and cinnamon to go along with it and now there are nice, sweet, thick, rich honey notes. The leather notes have decreased but they continue to be smooth and in the perfect amount. There remains a black coffee base. The front end flavors are so very sweet and rich. The black pepper remains very good and lingers very nicely on the finish. The cigar is medium to full bodied at this point. The cigar is somewhat complex due to the changes it is making. The cigar is almost perfect at this point. The first third rating is 95. 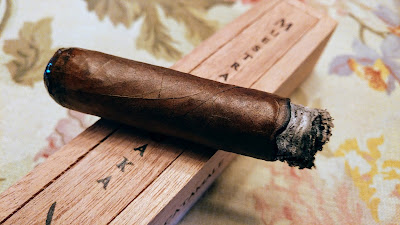 At the midpoint (48 minutes) the previously described flavor of sweet cedar is again morphing back to a citrus but it's like a citrus liquer. It's very sweet and deep. The honey notes continue to be amazing. There are nice brown sugar notes and cinnamon plays a big part in the flavors. I also got white chocolate. That's a lot of flavors but that's what I got from the cigar. The leather continues to be creamy and works so nicely with the other flavors. The subtle coffee base continues, as well. The black pepper remains very good. The cigar is full bodied. The finish is unchanged and very good. I urge you to smoke this cigar as slow as you can. You will get all these amazing flavors. At the midpoint the cigar continues to be great. The midpoint score is also 95. 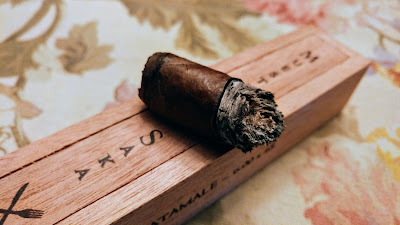 The cigar lasted 1 hour 13 minutes. It continued to have those amazing flavors but it changed just a bit. At the end the orange liqueur had a lot more brown sugar and cinnamon notes. Rather than white chocolate I got a much darker flavor of molasses although the honey notes are still there. The leather notes continued to be creamy and smooth. The light black coffee based continued. The pepper remained very good. The cigar is very full bodied. You can feel the ligero surging through your veins. The finish was unchanged. This was nothing short of an excellent cigar. You will be hard pressed to find these but if you do you will be in for a treat. The final third score is 95. You can purchase these cigars HERE. 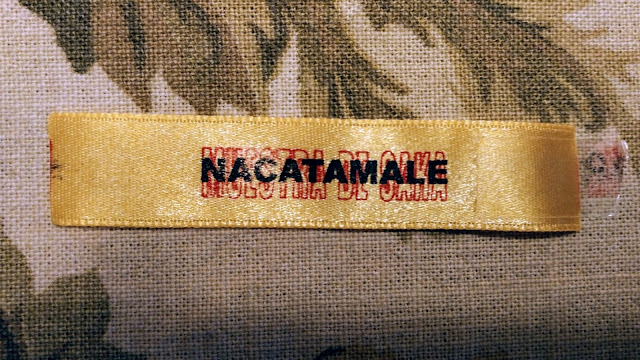