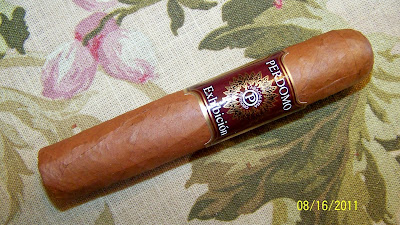 This is one of the newest cigars from Perdomo which was introduced at this year's IPCPR in Las Vegas. It's so new that not too much is known about it so I decided to review it to see what I thought. I have been a long time fan of Perdomo and their cigars so I am very excited to try this one. The Exhibicion series includes 2 other versions; Connecticut and Maduro. I'll review those at a later time.
Atlantic Cigar describes this cigar like this:


The Perdomo Exhibicion Sun Grown cigars are a medium to full flavored cigar that produces loads of earthy flavors followed by hints of spice and pepper. Made with rich Nicaraguan tobaccos that are carefully aged and blend to perfection, in the filler three styles of tobacco are used; 4 year old seco leaves from Condega are blended with five year old viso leaves from Jalapa and the final kicker 6 year old ligero leaves from Esteli delivers its body and strength. These aged fillers are held together by an aged Nicaraguan binder and finished with 6 year old or more Nicaraguan sun-grown wrapper that is then sorted and only the very best goes through special bourbon barrel aging process for an additional 10 months. The cigars are then packaged in boxes of 20 cigars in the following sizes; Robusto (5 x 54), Toro (6 x 54), Churchill (7 x 54), and Torpedo (7 x 54). 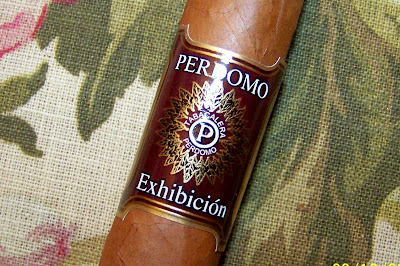 Nick Perdomo says this about his new cigars:


“Perdomo Exhibición is the culmination of our factory’s hard work and dedication to quality and consistency,” states Nick Perdomo. “Our team continues to work in unison to provide new and exciting blends to a world audience.”

“We will completely absorb the SCHIP tax on Perdomo Exhibición as we do on all of our other brands,” states Nick Perdomo, Jr. “We are committed to providing the very best cigars at great price points for both retailers and consumers as we continue experiencing these tough economic times.”

Tabacalera Perdomo has their factory and agricultural growing region in Esteli, Nicaragua with their headquarters in Miami Gardens, Florida. Over the past several years Perdomo has made some of the best cigars on the market, including the Habano series, Grand Cru, and Champagne. Perdomo is deserving of the high acclaim they have received.


The test draw was very good. The initial flavors were a very peppery, tangy grapefruit citrus with a mix of vanilla. The finish was long with sweet grapefruit notes.
After a minute or so there were some lightly roasted almond notes. This cigar is very spicy and peppery. I love that combination! The finish has added some vanilla notes to the grapefruit notes. 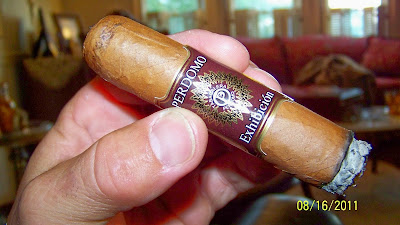 About 1/3 into this robusto the extreme sweet grapefruit notes continue along with the thick black pepper. The vanilla notes play second string to the grapefruit but their richness seem to round out the cigar. The long finish is still loaded with sweet grapefruit notes and there are light roasted almonds noted. Pepper lingers everywhere.

At the midpoint a few more almond notes sneak in but they are no match for the citrus! They're noticeable but not overpowering in any way. The star of this cigar is the amazing sweet, rich grapefruit citrus. It makes the cigar candy-like. On a diet and can't have sweets? Just smoke this cigar and satisfy your cravings! It's that sweet! Not some cheap flavored sweet cigar; this is a great sun grown masterpiece! 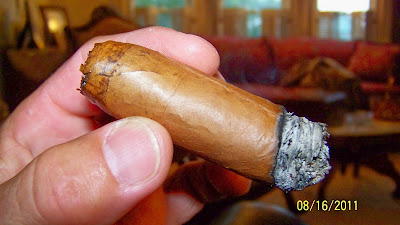 The cigar is medium bodied in my opinion. I drank water while reviewing this cigar and the finish was never washed away. The sweet citrus and vanilla notes still come shining through.

The burn was very good throughout the smoke and never needed any touch-ups. 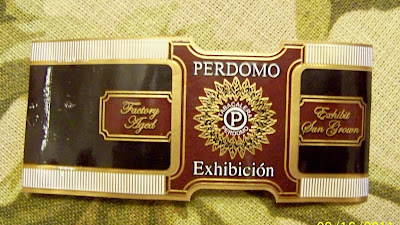 As the cigar burns it gets richer. The cigar continued it's great flavor right to the end. The cigar did not change much at all making it very consistent. I am a huge fan of rich, sweet citrus and I absolutely loved this cigar. They are new to the market so get out and grab a few for yourself. You won't be disappointed.

Great site and thanks for all of the great reviews on cigars here. I'm out the door to my local supplier to try a few that you have suggested.

I heard these delicious smokes are to be discontinued.

I have not heard that but if they ran out of the leaves to make them they could be discontinued. I still love these in the Sun Grown version.