The E.P. Carrillo Elencos Series will have the same exact blend as the E.P. Carrillo Edición Limitada 2010 Elencos which was Rated 94 in Cigar Insider and ranked #8 for cigar of the year 2010. I also rated the cigar a 94. These will be available in late March or early April, 2011. The story behind this cigar is quite interesting. When E.P. Carrillo debuted the Edición Limitada 2010 Elencos they were a limited edition cigar of only 10,000 cigars. With the fantastic success of the cigar they decided to purchase more of the same tobaccos in a large amount to make the Elenco that I am reviewing. The price point will be better and the cigar will be available in 3 sizes:
Don Rubino: 5 1/4 x 50 ($9.50 retail price/cigar)
Elites: 6 x 54 ($12.00 retail price/cigar)
Acto Mayor: Torpedo 6 1/4 x 52 ($12.50 retail price/cigar)


I am fortunate to be able to sample these cigars before they hit the market. Today I am reviewing the: 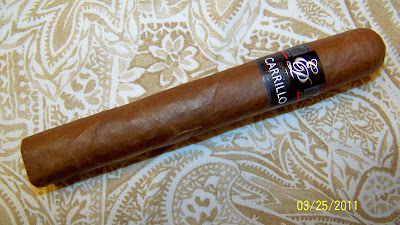 These cigars boast an aged Brazilian Habano wrapper and aged tobacco blend from Nicaragua and the Dominican Republic.

The cigar had a great draw. The first draw was almost pure cinnamon! As it burned it developed notes of cinnamon, orange citrus, and rich vanilla and black pepper with a great rich finish of vanilla and lingering black pepper.

The spice is great, consisting of orange citrus, rich vanilla, cinnamon and black pepper. The finish continues with the rich vanilla and lingering pepper.

At the 1/3 point I am loving this cigar. When Ernie, E.P. Carrillo III, asked me to try these and report back I was a little apprehensive because that could affect my rating. But, I am happy to report that it made no difference because this cigar is so amazing. A new flavor that emerged at this point, raw almonds, is noted in a minor part on the finish. All the flavors are easily distinguished. 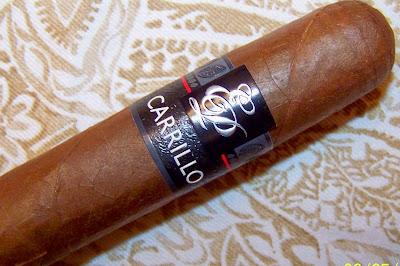 At the midpoint the burn is very even. The cigar is very rich. The flavors are distinct but combine so nicely. The black pepper is always there and lingers on the palate. The cigar has not changed; still very good and rich.

The cigar stayed great to the end becoming even more richer. The cigar is medium bodied. The flavors combine to taste somewhat like tawny port. Just amazing. The Carrillo's should be very proud of this cigar. The richness of this cigar is a joy to smoke. I highly recommend it. This cigar seems to be a little richer than the Limitada 2010 and the price point is better giving this cigar a higher score.